Who doesn't love a duochrome? 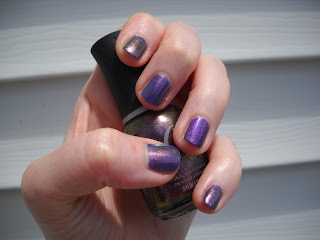 I love duochrome polishes; it's almost like an opportunity to wear more than one polish at a time. I think they tend to make a manicure more fun to look at.  Today, I'm wearing Orly's Space Cadet over Julep's Anne.  Space Cadet is a pretty sheer polish, so having an undercoat kept me from having to use 3-4 coats of polish on my nails.  I did an accent nail of Virtual Violet, a holographic purple. 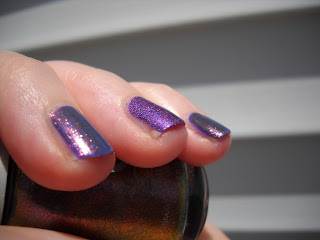 In full sun, it was hard to tell that I had 2 different polishes on, but in medium light (indoors), the duochrome effect of Space Cadet really shone.  It shifts from reddish-purple to a dark chartreuse, and is pretty spectacular as a polish! 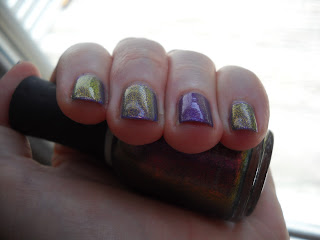 Space Cadet is somewhat hard to find; it came out in fall of 2010, and isn't part of Orly's core line.  Some Ultas have had the Cosmic FX collection in stock (I just found mine two weeks ago at the local Ulta), but otherwise, online is your best bet.  Hard Candy has a polish called Beetle that is a dupe for Space Cadet, and you can find that color at almost any WalMart, so that may be the easier route to get this fantastic color!

Email ThisBlogThis!Share to TwitterShare to FacebookShare to Pinterest
Labels: Duochrome, Julep, Orly, Products purchased with my own money, Purple