One of my favorite things about indie polishes is that when you buy a bottle from a reputable indie maker, and get to see it in person and on the nail, there's always a little something special, a little extra, a surprise about the polish that makes it seem all the more fantastic to own.

When I was given the opportunity to purchase some of Pretty & Polished's holiday polishes, I chose polishes that I knew I didn't have in my collection, so I expected them to feel pretty unique to me.  But I really was surprised at how fantastic and unique these polishes were! 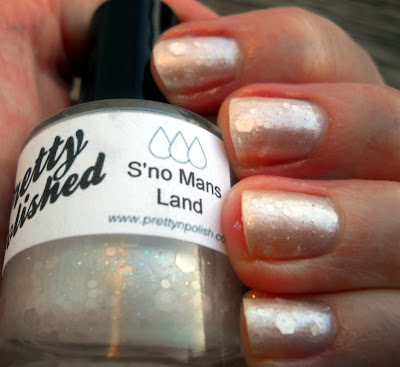 I chose it because I only own creme whites, and wanted a pearly white to add to my collection.  Little did I know that this polish had these fabulous larger hexes that look like pearls on your nails, and that the iridescent glitter would really evoke the fresh-snow-in-the-sun look. 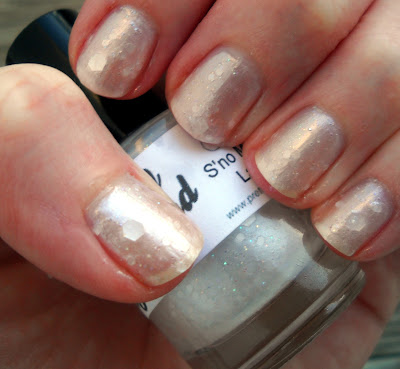 As for application, I did put the bottle on its side while I put on my basecoat, just to make sure the larger hexes were available to the brush when I polished.  I do this with pretty much all of my polishes with larger glitter, and it's a technique that has served me well. 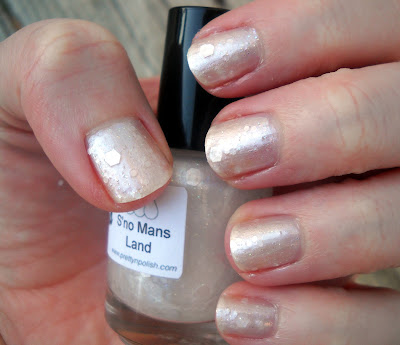 The polish is thickish, to suspend the glitter, but not gloppy.  It isn't brushstrokey or too frosty either.  It really is more of a pearl finish than a frost, and is a nice soft white, instead of being stark or harsh.

Next, I chose Love Always, Candy Cain (what a fabulously sassy name!).  This polish contains white, red and silver glitters of various sizes in a clear base, obviously invoking the imagery of candy cane colors.  I don't have any larger red glitters, and have wanted one for a long time, so I figured it'd be a good choice.  Here, I layered it over S'no Mans Land: 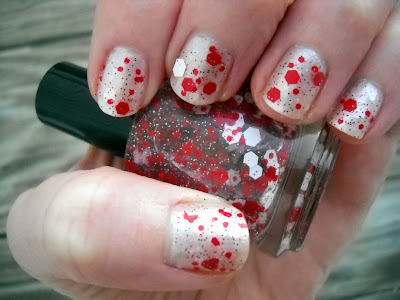 When it arrived, I was thrilled by the mix of glitters; big white matte hexes, red hearts, white hearts, big, medium AND little red hexes, red and silver microglitter etc.  It's fabulous, but it's also a very thoughtful mix; it doesn't look like a glitter pinata broke over a bottle, it looks like a really appealing glitter topper. 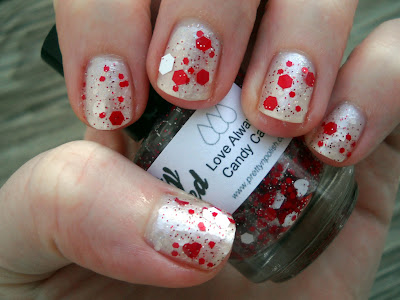 The consistency of the polish isn't globby like some glitterbombs, but the thinner polish meant I ended up doing my "bottle on the side during basecoating" trick just to make sure I'd get a good blend of glitters.  Application was easy, and I found one coat sufficient, although going to town with 2 or 3 would be a lot of fun. 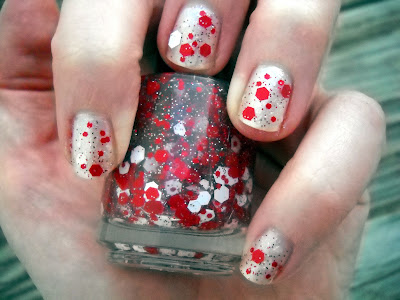 Overall, I was really impressed with these two polishes.  The colors fit the holiday theme, but they don't scream CHRISTMAS at you.  I know for a fact I can wear these other times of the year and not feel unseasonably elfish.  Application was pretty easy, especially for polishes with such large glitter, and the glitter itself is obviously well chosen and well thought out.  Dry time was surprisingly quick; I expected it to take longer, but with a good coat of Poshe I was all set!

Disclaimer: I purchased these items with my own money, at a discounted price for use in a review on my blog.  My opinions are my own and were not influenced in any way by Pretty & Polished.

Email ThisBlogThis!Share to TwitterShare to FacebookShare to Pinterest
Labels: Glitter, Holiday, Pretty and Polished, Products purchased with my own money, Red, White